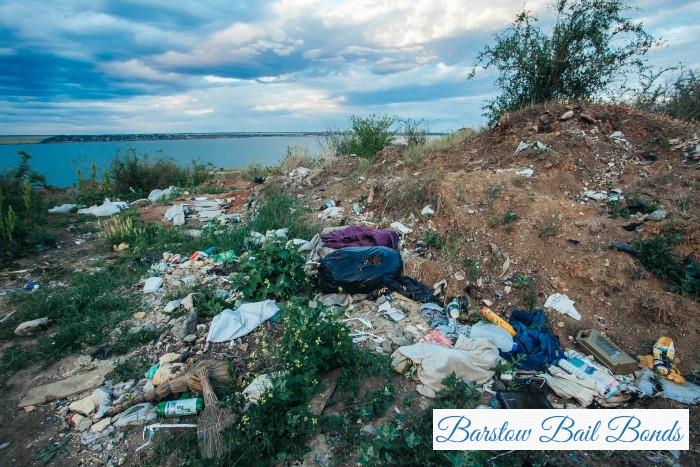 It is becoming increasingly uncommon to find piles of waste on both private and public land. One of the main reasons for the trend of simply dumping unwanted waste on abandoned lots or the far corner of private property is because of illegal waste dumping laws in California.

California’s California Penal Code 374.3 PC deals with the issue of illegal dumping in the state. The law clearly states that:

(a) It is unlawful to dump or cause to be dumped waste matter in or upon a public or private highway or road, including any portion of the right-of-way thereof, or in or upon private property into or upon which the public is admitted by easement or license, or upon private property without the consent of the owner, or in or upon a public park or other public property other than property designated or set aside for that purpose by the governing board or body having charge of that property.

(b) It is unlawful to place, deposit, or dump, or cause to be placed, deposited, or dumped, rocks, concrete, asphalt, or dirt in or upon a private highway or road, including any portion of the right-of-way of the private highway or road, or private property, without the consent of the owner or a contractor under a contract with the owner for the materials, or in or upon a public park or other public property, without the consent of the state or local agency having jurisdiction over the highway, road, or property.”

The good news is that if you’re caught dumping illegal waste, you likely won’t be arrested, however, you will be fined. At best, the fine will only be $250 though it can be as much as $3,000. It’s important to note that every single day that the waste is left, it’s considered a separate infraction, so if you’re issued a $1,000 fine and the waste is there for five days, you’ll owe $5,000.

Fines are determined by both the size of the illegal waste dump and how many times you’ve been caught dumping illegal waste.

Don’t assume that just because you’ve been issued an illegal dumping fine that your option is paying the fine. There are some lines of defense that you can use when charged with this particular infraction. Examples of possible defenses include:

• That you weren’t actually responsible for the waste
• That you made an effort to clean up the dumpsite but were let down by the company you hired
• That the waste dump was an accident (For example, not knowing that a bag of trash had fallen off your truck)

Whether the waste was dumped intentionally or as part of an accident, it’s in your best interest to deal with the matter as quickly as possible.